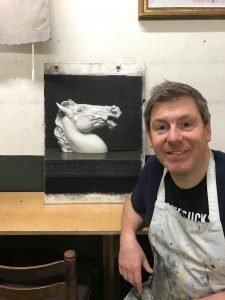 John Skelcher was born in Britain in 1968. He divides his time        as a painter between working for exhibitions and giving group tuition. He studied at Birmingham Institute of Art and Design and Staffordshire University.  John lives in the UK but is currently studying classic painting in the realist tradition at Angel Academy in Florence in Italy.

For five years, John held a studio with The Contemporary British Arts group in Deptford, London.

He has taken part in numerous group exhibitions including the Deptford-x via studio at Contemporary British Arts group.2002,2003,2004. Joint show with Martin Chatfield at The Eagle Works Gallery and studios,Wolverhampton 2000, The Telford and Wrekin Open 1999, Bear Steps Gallery 1998, The Riversley Park Museum, Nuneaton-1995’The Right End of The Wrong Stick’ (one man show). ‘Hyper-Tryptical Illusion’ At the University of Staffordshire Gallery, 1993. ‘At Home and Away’ Shared Exhibition with Adam Stone-1990,Stoke on Trent Museum and Gallery. Stoke-on-Trent open exhibition 1989.

His work is held in private collections in the U.S.A Italy and the UK. This web site includes details of pictures for sale, limited edition signed prints, examples of commissioned pieces and information on how to commission a painting.

If you would like to be sent invitations and catalogues for forthcoming exhibitions please e-mail John Skelcher with your details.